Temple of education and sport

This proposal arises from a deep analysis of the location and environment, it is a study of
the existing to design the future of the Seu. The project, which is located in the most fertile zone of the Valira River, takes as an
architectonic referent the Castellciutat. The designed campus is integrated with the environment, it rises above the topography
and it acts as a filter between the public and private space. The territory’s architecture, materiality, and character were taken as the
basis to construct a building that is a referent of functionality, sustainability, and efficiency using existing systems.

The projects’s adaptation to the environment

Based on plot characteristics and the requested program and its surface,
it was decided the following:

– To generate a maximum line of building occupancy with a distance of 3.5 meters from the limits of the plot. In this manner, it is possible to have air within the bordering plot.

– To organize the program in an elongated band which is located on the north side of the plot. As a result, the maximum exposition is received by the south part and it does not shadow the rest, it ends the plot on the limit and it creates a north windscreen for the external program developing in the ground floor a unique height.

– This programmatic band bends on the extreme north to construct the plot’s closing on the limits of the northeast and it creates access to the principal entrance in the campus.

– A new topography connected with the existing one picks up the ground floor and allows: To potentiate the integration of the campus within the environment. It turns out to be the same referent as the Castellciutat which is a building sitting in the territory. To generate a valley of activities inside the mountain which is protected by the perimetral topography.

Organization of the functional program

The functional program is organized in a longitudinal band that is bent in one of its extremes. On this band, we did two cuts generating three programmatic blocks that allow, first, the optimization of the circulation, and second, an independent use.

The first block (block A), located at the northeast where the principal access is, has: 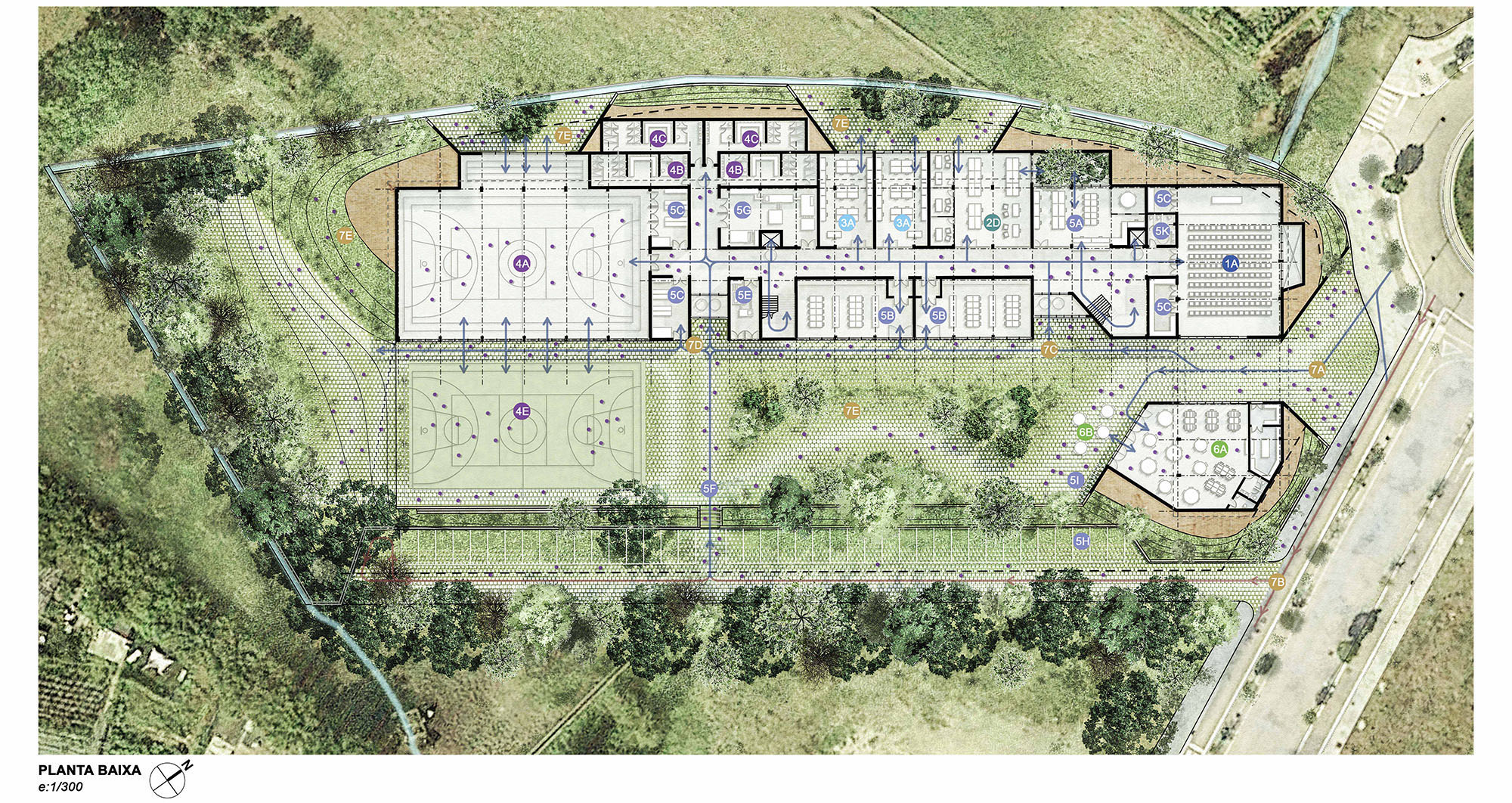 In the second block (block B), the reception is located in the main access of the building. Moving to the south, it is found the labs and ateliers with an exit that goes outside. This relationship with the outside allows to perform all the activities there and also people can get inside easily and it is possible to bring large material without the need of entering the building.

– In the first floor, we can find the spaces destined to be classrooms, they have different measurements according to the uses that they will have in the interior. The classrooms have a bottom and adjusted proportions to guarantee light on the whole surface. One of the party walls of each classroom has mobile panels, so it is possible to join these two. The small classrooms have access to the external space in the south, which also offers the possibility of expanding the functional space. Besides, next to the main vertical circulation, it is created an informal space for working and a zone where students can socialize. The circuits connect the main circulation with the library, the study hall, and the tutorial rooms, which are located in the first block.

– In the third floor, we can find all the spaces exclusive for teachers and administrative workers. There are interior and exterior spaces to improve the quality of the workplace. This level gets connected by its extremes with a vertical circulation that gives access to the rest of the programs on campus in an easy manner.

The third block (block C), located in the southern part, has spaces for physical activity and general services on campus (warehouses, installations….)

-In the ground floor, we can find a multipurpose track and wardrobes, everything located in the limit zone with the building’s secondary access and the southeast vertical circulation. In the same way, the multipurpose track has direct access to the exterior part using two facades: the east one opens up to the exterior track and the west one to the space that allows physical and informal activities in the fresh air.

-In the first round, the campus services are found, for example, warehouses which are connected to the sport or teacher’s space and maintenance rooms. The location of these zones allows easy access and the optimization of the circuit’s installations. In this part is possible to load and download in the parking zone.

-In the first level it is located the cardio and free weight zone, this is placed on the multipurpose space and they both are visually related. This sportive zone is connected with the classrooms and the general vertical circulation of the building.

The vertical communication and service core are placed next to the interstitial spaces which were created to separate the three blocks. This allows improving the circulation of people and the circuit’s installations.

The design of the future IEF center was born with the idea of integrating topographically the building and the environment. This is why we thought to use a first ground semi-basement developed with a massive typology that is similar to the components of the underground; on top of it, there are three independent blocks formed by two levels. These three volumes are very light because they recall local and traditional constructions.

It was considered to use cement and stone as the foundation where a light construction of wood starts. It responds to the architectonic requirements in the aesthetic uses and avoids the direct contact of wood with the terrain because this process eliminates any possible pathology derived from humidity.

Due to the dimensions of the building’s first ground, it is necessary to have expansion joints. In this case, it was proposed to have intermediate spaces linked by sliding joints in the two neighboring blocks.

The constructive and structural project based on prefabrication and dried joints make it easy two maintain these two. Finally, the development of a “digital twin” of the building allows to optimize the maintenance and avoid problems by identifying the risks with preventive solutions.

Materiality of the building

The project chases the coherence with the environment and location. This is why we apply traditional material from the zone to these present constructive systems. They agree with the naturalization of the project and the biophilia or the joint of the human being with nature in an ancestral and evolutive form.

The proposal has materials of local use such as stone and wood. These two are incorporated in the first place, the zinc plates give us the so characteristic tonality from the roofs of the zone, also, the vegetation in the project composes the complete coating, thus it is used as construction material. 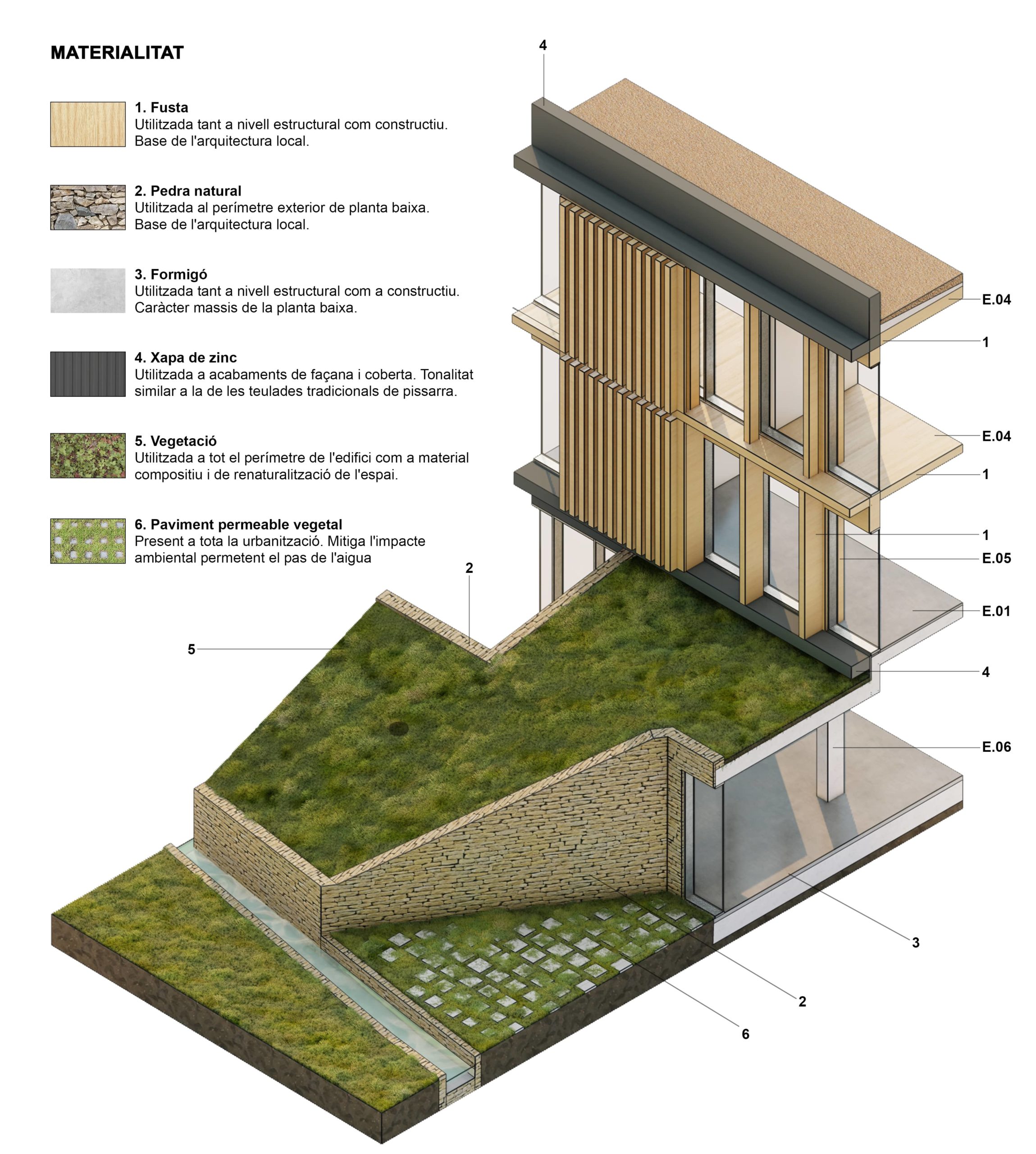 The decisions in the project optimize the comfort of users. This is why we seek to improve certain aspects related to the passive systems:

– All the spaces have natural ventilation and most of them have been designed to allow cross ventilation which guarantees the renovation of the interior air.

– The building has a north-south orientation that allows controlled sunlight and illumination. In the case of the south facade, it is controlled by brise soleils installed in the double facade. This guarantees to shadow in the interior space during the summer months, but it also allows solar energy to pass during winter.

– The building has a compact form that minimizes the surface exposed to the exterior temperature and reduces the thermal loss.

– The ground floor is semi-buried, especially the north face. It considerably reduces the thermal needs of these spaces because it gets a comfortable temperature.

– The ventilated facade system allows improving the thermal behavior, especially in the months of summer. It guarantees correct vaporization from the water and avoids humidity and keeps the insulation dry.

The project was designed taking into account the life cycle of the materials and the constructive systems used in order to optimize reusing or dismantling.
This design reduces waste and carbon print from the building making it a sustainable and closed system.

The philosophy to design the installations is to exploit the natural resources from the environment. We wanted to create a system that reduces energy consumption and CO₂ emissions without leaving behind the user’s comfort. The conditioning installation and the ACS production cause a higher consumption in buildings. Energetically, the installation is the most important and we have to have special care to get an efficient installation. It was designed a conditioning system and ACS production that combines different renewable technologies. We chose a centralized system of energy production that combines sun photovoltaic energy, aerothermal.